Articles tagged with: Back To School 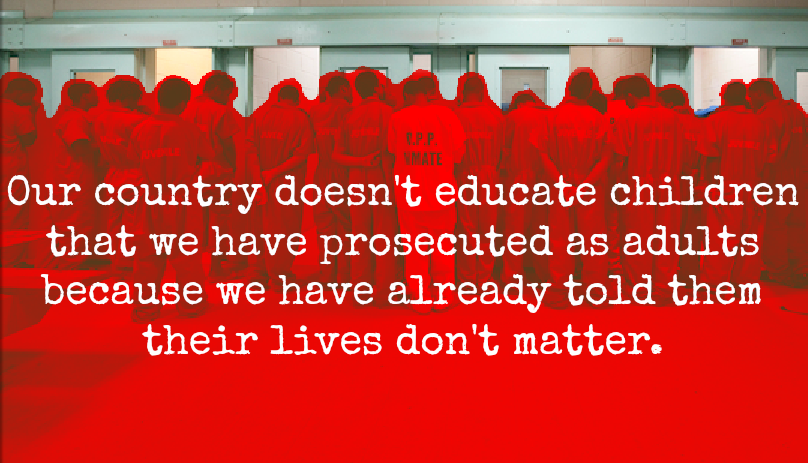 It’s back to school time in the nation’s capitol and a buzz is in the air—traffic is picking up, parents are excited to get back to the routine of school days, and kids can’t wait to meet their new teachers and reconnect with old friends.  It’s a time for fresh starts and new beginnings—of opportunity to overcome academic challenges of the past and embrace the possibilities of the future.However, children that we have charged as adults in the criminal justice system, don’t get to be part of this routine. While detained in adult jails—they receive little—if any-- formal education.   In adult prisons, these youth have been barred from receiving PELL grants since 1994, unlike youth in the juvenile justice system. We tell this to 100,000 children a year who spend months, years, and even decades, in adult jails and prisons.Our country doesn’t educate children that we have prosecuted as adults because we have already told them their lives don’t matter. That they have lost the opportunity for a second chance.  That punishment for what they have done (or been accused of doing) is valued more than the opportunity to get services and turn their lives around. We tell them this despite polling that shows that 78% of the American public believes in second chances for youth, and favor rehabilitation over incarceration.  In the past year, we have sent this message to 10 year olds in Pennsylvania,  12 year olds in Wisconsin,  14 year olds in Mississippi,  and 15 year olds in Florida that are sitting idle in adult jails and prisons, “doing time”—but not mastering their times-tables.We don’t educate them because we likely locked them out of their schools before we locked them up in adult facilities.  An estimated 65% of incarcerated children meet the criteria for a disability, three times higher than the general population according to the National Disability Rights Network.  Children with learning and emotional disabilities are more than twice as likely to receive an out of school suspension than those without disabilities. For disabled children of color, these numbers are even more disparate—1:4 boys and 1:5 girls of color with disabilities are suspended from school.We also don’t educate them despite knowing that education while incarcerated is one of the most affordable ways to ensure that when they go home, they stay home. Yet, most youth are denied educational and rehabilitative services that are necessary for their stage in development when in adult facilities. A survey of adult facilities found that 40% of jails provided no educational services at all, only 11% provided special education services, and a mere 7% provided vocational training. This lack of education increases the difficulty that youth will have once they return to their communities.On Capitol Hill and in the White House, policymakers are just starting to question these tactics with the (re) authorization of new laws and pilot programs that benefit incarcerated youth. Unfortunately, most have limited application to youth in adult facilities. For example: The Elementary and Secondary Education Act (ESEA) is up for reauthorization.  Title 1 Part D of ESEA addresses prevention and intervention programs for neglected, delinquent, or at-risk youth, requiring that schools facilitate the re-enrollment, re-entry and proper education for youth returning from juvenile justice system placements; that educational records and credits earned during placement in the juvenile justice system are transferred back to the youth’s community-based school; and that some of the  funds are allocated toward youth re-entry and re-enrollment into high quality educational settings.  These supports do not apply to youth returning from adult facilities.The Juvenile Justice and Delinquency Prevention Act (JJDPA) is also up for reauthorization.  It has four core protections for incarcerated children including the removal of youth from adult jails, so they can receive developmentally appropriate services (including education).  Both the Senate Bill (S1169) and House Bill (HB2728) increase opportunities for incarcerated youth to transfer educational credits received while incarcerated back to their home high school.Finally, the PELL grant program, which helps low income students pay for college does extend to youth incarcerated in juvenile facilities and adult jails. However, those in adult prisons have been barred from using PELL grants to pay for college credits since 1994.  Just this past July, the Obama Administration launched a pilot program, Second Chance Pell Pilot, in which incarcerated individuals who are eligible for release in the next five years can apply for PELL grants.Education remains the great equalizer in our country in terms of long-term positive outcomes for children and families. Access to education should be a requirement for children who have come in contact with the law, to help them prepare for a successful future.  All children deserve the right to a quality education, even those we consider adults before their age determines them to be.