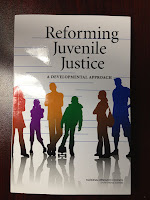 On Monday, June 10, The National Academy of Sciences (NAS) discussed the findings of their recently released report: Reforming Juvenile Justice: A Developmental Approach. The report found that well-designed, community-based programs are more likely than confinement to reduce recidivism and facilitate healthy social and moral development for most young offenders and that even in the most serious cases of personal violence, criminal court sentences should avoid confining adolescents in adult prisons.

Office of Juvenile Justice and Delinquency Prevention (OJJDP) Administrator Bob Listenbee spoke briefly about the implications of this research as a critical tool for promoting a positive behavioral model for juvenile justice. He emphasized, “I am confident that there is very strong support for juvenile justice reform at the present time” and reinforced his commitment to increasing OJJDP’s role in disseminating information on states with strong reforms and providing technical assistance to states who want to do the same.

Other speakers included researchers, juvenile justice practitioners, doctors and others with expertise in adolescent development and delinquency. The panelists presented the findings of the report, noting six conclusions in particular:

The panelists and audience concurred that this research will be critical in advocating for reform. Practitioners emphasized that this is the research that juvenile justice experts could see, but they did not have the science to back up their observations. With this data however, there is finally a strong body of science to serve as a base for passing legislation that coordinate juvenile justice practices with the specific needs of young people.  They emphasized that reauthorizing the Juvenile Justice and Delinquency Prevention Act would be critical to this effort.

To do your part to ensure that the juvenile justice system is aligned with what science shows is beneficial to children, families and society, sign the petition to fund juvenile justice reform programs.